Well, there it is. The first gluten-free sourdough bread we made. After stirring the ever-funkier starter for several days complete with cabbage leaves and apple skin, my son was not feeling too confident about actually trying the bread. To be honest, neither was I. I really had no idea if the starter we’d made was going to work because it wasn’t ever as bubbly as I expected it to be, but we both were pleasantly surprised. The bread is pretty good! 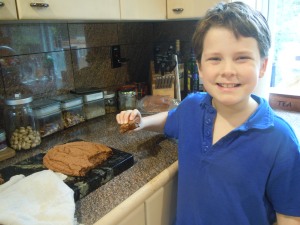 As you can see from this picture, it did not rise much though. I am guessing as the starter sits for a few more days there will be more yeast activity, and we will try again on Wednesday to make another loaf.  My son thought the bread was more than “pretty good” incidentally, probably because he helped make it and felt ownership in it. That loaf is a blend of teff flour, millet, brown rice and tapioca and he pointed out that the hard crust tasted like cereal and he was right~ it really did. Next time I might do less teff and try gluten-free oat flour for a lighter loaf~ more trials to come!