My son needed a science project and I needed a reason to try to make the sourdough starter recipe I’ve been eyeing for months, so we decided to work together and see what happens. The recipe we are using is from Jennifer Katzinger’s Gluten-Free & Vegan Bread. I’ve wanted to make sourdough starter for a long time now, ever since I read about it being a more easily digested bread than other types with single strands of yeast, but the recipes I read always seemed too complex and involved too much planning. Once I read Katzinger’s version which was already gluten-free I started thinking I could do it. Except I didn’t. There was still that planning part that got in my way, until my son’s science fair came up and I thought, we could do this~ we have a week and a half, plenty of time to get the starter going and then to try to bake with it a couple of times, with enough time even for a failure or two. We will actually use the starter later today for the first time, but actually making the mother was easier than I expected, so in case you are feeling daunted by the idea yourself I thought I’d share the steps so far. First, get a gallon size glass jar and put in 1C teff flour and 1C water.

Then add two purple cabbage leaves and the skin of half an apple. 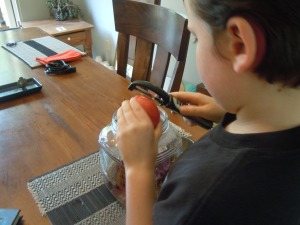 Mix well again and then let it sit in a warm spot for 12 hours before stirring and adding more teff and water. After 48 hours (with 12 hours in between stirrings and adding more flour and water) it should be bubbling with yeast activity.

It is then time to take out the cabbage leaves and apple skin and put it in the fridge. It is ready to be used.

Now it’s time to test if this has worked. There is starter resting on my kitchen counter right now warming up with fresh teff and water for 4 hours and hopefully creating some yeasty activity. Crossing my fingers that we will have fresh sourdough bread by tonight. We’ll see!

Gluten free, mainly vegetarian herbalist living in beautiful Western Washington, but love to travel. My two boys have various other food intolerances including gluten, so I think and write about food quite a bit. Author of the children's book, The Knight Owl, which has it's own blog:http://theknightowlblog.wordpress.com/. View all posts by kristenannmoore