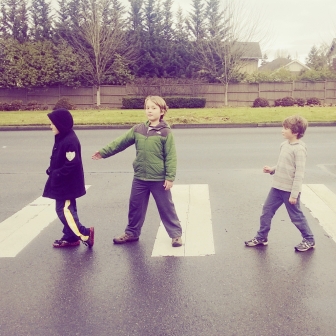 That two word phrase keeps popping up in my mind now that the first week of school is underway, because schools are such a great place to view a community’s cultural norms. The first thing that is blatantly apparent is the fact that walking or biking to school is not a norm in this community, or maybe this generation. I’m not sure how widespread it is but I do think this greater Seattle area in general has an overzealous relationship with cars. When I read Elizabeth Gilbert‘s book Eat, Pray, Love and she talked about how each city has one word that defines it, I thought that this area’s word would be ‘drive’. Not only for the literal drive a car meaning, although that is certainly part of it, but also the drive that means pushing people to work harder, longer hours than ever before, driving kids to start sports at an earlier age or else lose out on it as well as other extracurricular activities~ music, dance, chess, stem-activities, the list is endless. Not that being ‘driven’ as an innate trait is bad, of course it’s good to be focused and hardworking, and there’s plenty of that around here too, but mostly it seems like a rather overly driven culture here and the actual driving exemplifies the mental and emotional aspects. My older son is in middle school which does not have bus services for the kids that live within a mile or maybe a mile and a half, and they say it’s because those kids can easily walk or bike to school. OK, I absolutely agree that they can indeed walk or bike that far, my earlier posts attest to that here and here, but the thing is, no one actually lets their kid do that. Everyone drives their child to school and the traffic could rival a boy band concert at an all girls’ high school, and yet parents still prefer to put up with the frustration of sitting in traffic, and planning their mornings and afternoons around drop off and pick-up times that take a ridiculous amount of time rather than have their kid walk or bike. It just isn’t done. So, how do you turn around a cultural norm like that? Or should the school accept the fact that they could get a handle on their traffic mess, and it is a problem about which we get regular emails so it’s definitely an issue, by adding another bus or two and picking up most of the car riders? Or should they fight the cultural norm with setting up groups so kids can walk or bike together, perhaps get parent volunteers to escort the kids for the first week until they are used to it, somehow reward the students who show up on bike or by walking, or I don’t know….do something. Because the problem with just adding another bus or two is that we are branding that cultural norm into kids’ heads~ one does not walk or bike to a place that is less than a mile away. One takes a vehicle. Is that really what we want kids learning? Is that remotely healthy for any single person much less the earth as a whole? I don’t think so.

Another cultural norm on display at schools is the food. Oh dear. The cafeteria at my son’s middle school is packed with a dazzling array of junk food they can buy day in and day out~ donuts, chips as diverse as the languages spoken in the hallways, candy of all stripes, and sugar wrapped in a thousand disguises. The main offerings are mediocre at best (nutritionally, visually, taste-wise) and the salad bar offers unappetizing raw veggies which are probably as nutrient dense as the composition notebooks found in the kids’ backpacks. Again, is this how we want kids to learn to eat? What they expect from mealtimes is absolutely going to be influenced by the meals they have five days a week, even if the other mealtimes are different, they are still learning that the norm is to eat junk food. My friend from Israel was so surprised to find that here in the U.S. sandwiches routinely come with chips or fries. In her country sandwiches came with salad or a vegetable, or nothing. We don’t have to accept these norms just because they exist around us~ I often think of the Jane Austens and E.M.Forsters out there that have always written about the ridiculousness of their own cultural norms and eventually those norms did change. We can imprint our kids with healthy habits on a cultural level, or not. It just needs to be enough people’s priority I guess. It starts with recognizing the daily habits they we all partake in, sometimes mindlessly, sometimes joyfully, but all the time repetitively.